This year as in previous years, Dussmann, the ‘Kulturkaufhaus’ in the Friedrichstrasse, is enthusiastically taking part in what is set to be a riotiously diverse and exciting online Fete de la (Haus) Musique.

Dussmann, apart from being one of the city’s best-known and most-loved places to not only browse and buy books, CDs and similar, is also a great place to spend a little time – with plentiful spots to sit down and while time away, perusing whatever you may have found on the shelves – or sitting in the marvellous sunken café at the back of the building, with its gently dripping plant wall stretching up multiple metres above you.

Dussmann is interwoven into the cultural life of the city

I’m here to talk to Laura Weidenfeller and Liesl Rebbig about Dussmann’s involvement in the Fete de la Musique: Dussman, a partner of the Fete for over a decade, is interwoven into the cultural life of the city, running regular events – 8-10 on any given month: a lot of writers presenting their books, of course, but also concerts – both classical and contemporary – in any one of their multiple rooms and spaces which they’ve created and developed for this very reason.

“We’ve been involved with the Fete for around a decade,” Laura tells me when we sit together. “It makes a lot of sense for us because it’s a regular event and also because there’s always a lot going on right around here.”

The shop sits in fact some 100 metres from the Friedrichstrasse S-Bahnhof and is surrounded by one of the main historical and cultural areas of Berlin, and the Gendarmenmarkt is only a few blocks away, where just last year over 3,000 people met to take part in the Fete’s Europe-wide singalong, and let their voices raise over the square with Ode to Joy, What a Wonderful World and more.

Laura tells me about the events they usually run, and how the artists are often provided by Berlin-based music labels. “It’s also nice to have a chance to be able to try out different things during the Fete, and be able to feature interesting local artists – it’s turned into one of our most beloved projects. The people are so open, since they’re drifting from place to place during the day, and they turn up here when perhaps they weren’t aware of us before.”

And what’s planned for this Sunday, I ask? 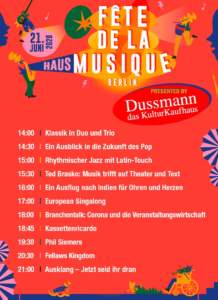 “A lot’s going on. One great aspect is that we’ve partnered with a local music school that’s very active, Fanny Hensel, and they came to us and we got something together quite quickly. We’re also working with the Stadtmuseen (city museums); and with a firm who provide technical musical capabilities.

The City museums are producing two videos, one a brass ensemble, and one a crossover musical artist.

And we’ve got someone performing here in store – that’s Phil Siemers; and we’re streaming the punk band Kassetten Ricardo out of the Frannzclub. In the shop we’ll also have a talk in the cafe, it’ll be filmed and streamed.

And they’re providing a 100€ voucher for the winners of a competition in collaboration with the Fanny Hensel music school, challenging people to learn the Billie Eilish hit All the Good Girls go to Hell (they provide a tutorial) and to send in their best version. Prizes include two days in the Fanny Hensel music studio, an Ableton music software licence, and the 100€ voucher that you can cash in anywhere in the multiple floors of the Dussmann Kulturkaufhaus (Cultural Department Store).